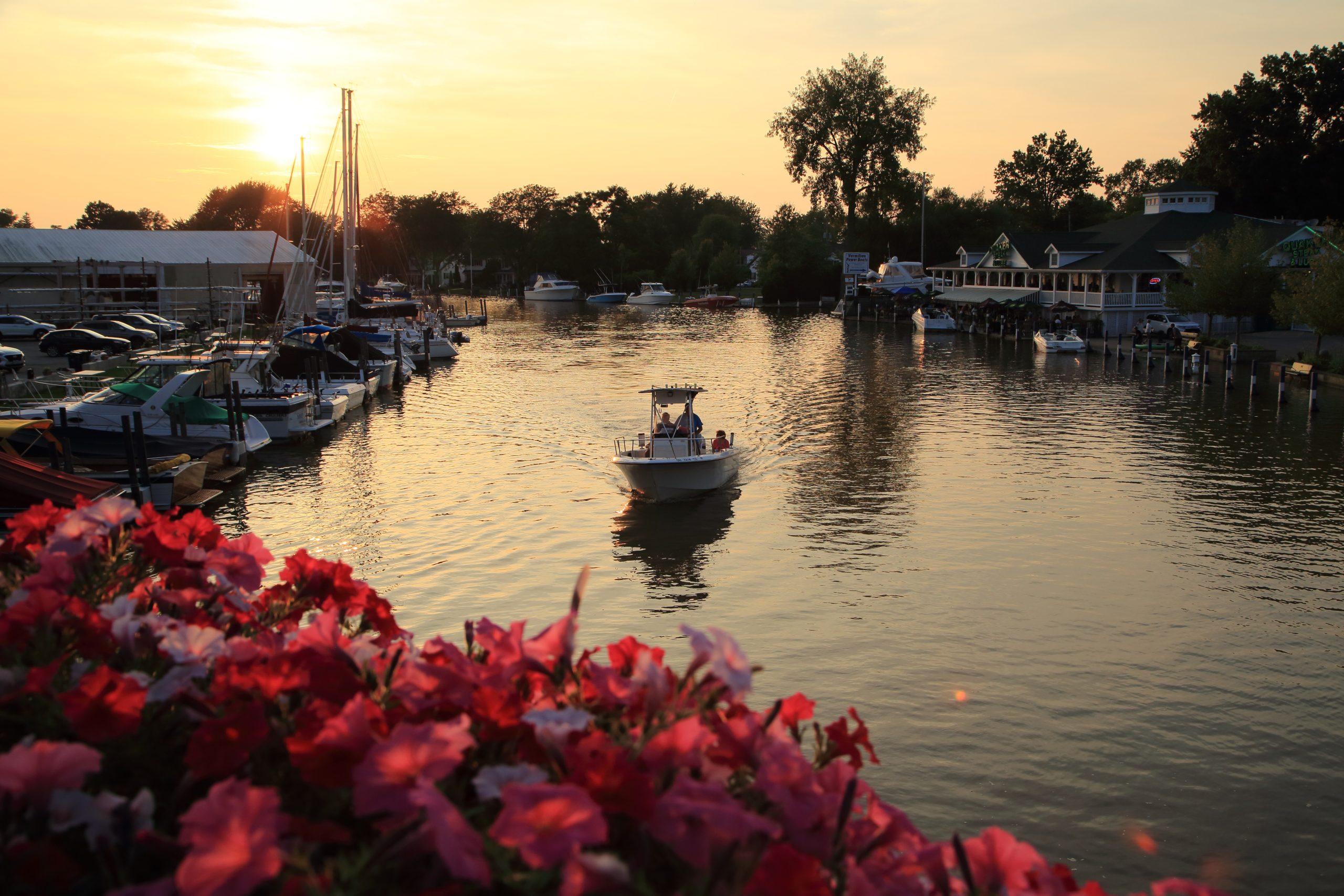 When most folks think of a marina, they think of good, clean, outdoor fun. But across the Great Lakes, marinas are a long-term, intermittent source of stormwater runoff, which may contain pollutants from industrial activities such as fueling, engine maintenance and boat painting. That is why they are the centerpiece of a major stormwater management collaborative initiative of the Michigan, Ohio and Wisconsin Sea Grants. Lake Erie, with over 250 marinas dotting its relatively short US shoreline, makes a good test case.

“Ohio is first on the list because we have been working with marinas on implementing green infrastructures for a while and already had the wheels greased,” explains Sarah Orlando, manager of Ohio Sea Grant’s Clean Marinas initiative. “We all agreed that if we first implemented in Ohio and learned from this in year one, it would inform what to do in Michigan and Wisconsin.”

Bolstered by an investment from the Great Lakes Protection Fund, the program is developing pilot sites on Lake Superior, Lake Michigan and Lake Erie that demonstrate the feasibility and advantages of installing green infrastructures at marinas to stem stormwater runoff and allow soil to filter pollutants.

Visiting a marina in Sandusky, Ohio, Orlando walks across an expansive parking lot and comes upon a broad concrete channel running directly downhill into the lake. A site like this is a good candidate for green infrastructure retrofits, but since marinas are often built on old industrial sites along the Great Lakes coasts, soils need testing before implementation of pilot projects. Nearby, a team from The Ohio State University surveys the parking lot to determine exactly how stormwater flows in heavy rain events.

“We wanted to target a marina like this,” Orlando explains, “because it’s privately owned, typical of most marinas along the lake, and we wanted an industrial marina. It’s what we consider an auto body shop on the water. They do things like engine maintenance, oil changes, sanding and painting.”

Marina runoff pollutants are a prime focus of the Clean Marina educational outreach in all three states. Teaching marina owners how to reduce runoff by adopting simple policies is job one. Stormwater from a single marina may seem like a drop in the bucket when the bucket is Lake Erie, but when those drops come from hundreds of marinas lining the lakeshore, it adds up.

The initiative is working proactively with marinas to intercept stormwater pollution before it enters the Great Lakes. The program has three primary goals: first, designing and installing stormwater abatement systems; second, developing an online green infrastructure toolkit for marinas across the Great Lakes; finally, monitoring runoff before, during and after completion of each stormwater control measure.

“A team from Ohio State is monitoring runoff reduction and water quality improvements throughout the process,” says aquatic ecologist Catherine Riseng, the grant’s project lead and assistant director and manager of the research program of Michigan Sea Grant at the University of Michigan, Ann Arbor.

“That’s something that doesn’t happen very often in these kinds of projects,” she adds. “What I think is exciting is that not only are we identifying ways for marinas to improve the water that leaves their sites, but we’re also creating additional value by improving aesthetics and amenities.”

Riseng envisions participating marinas becoming green infrastructure leaders, setting a new standard. As boaters travel from marina to marina, they will see signs touting water quality improvements and amenities like attractive rain gardens. She believes the boaters themselves will spread the word and become the project’s biggest boosters by the time work concludes in 2022.

The marinas in the project reflect a range of climates and ownership that are typical across the Great Lakes, ranging from private to public and from frigid to warmer zones. The project team has developed an interactive online toolkit that will include webinars and case studies teaching marina owners across the Great Lakes how to initiate their own renovations once projects have been completed. Interactive maps feature photos detailing what the project has learned at each marina along with a list of qualified contractors throughout the Great Lakes.

“The project’s goal is to figure out how to optimize treatment of stormwater at marinas,” explains Ryan Winston, an assistant professor at Ohio State. While leading the monitoring team, he is also a specialist in stormwater management and green infrastructure.

“Marinas are often entirely impervious,” Winston adds, “with rooftops and parking lots that cover the entire facility. So, in a heavy rain, there’s a lot of water that needs to be controlled before it’s discharged into the lakes.”

He also notes that marina pollutants tend to be industrial in nature —from oils and greases to marine paints that are 40% copper by mass. These contaminants can have a detrimental effect on the environment.

Winston’s team will experiment with a variety of abatement methods, from rain gardens to constructed wetlands. Their arsenal includes specially mixed soils that provide enhanced filtration as stormwater percolates through it. Two potential additives that may boost efficacy are iron filings to absorb and retain heavy metals, and benign residual chemicals from water treatment facilities that also trap particulates.

Of all the Great Lakes, Lake Erie may be the most stretched by demands of a diverse range of stakeholders. Its southern shore is a dizzying patchwork of nature reserves, farms, towns and factories. Like all Great Lakes, this rich diversity is bringing together stakeholders who are learning to compromise with one another—boaters with conservationists and farmers with factory owners. Across the region, programs like Clean Marinas are building partnerships that promise to keep the world’s largest freshwater lake system a place everyone can cherish, from people to wildlife.

Story and photos by Randall Hyman