Top Guns: The Best Copilot for a Water Manager is Real Time Data 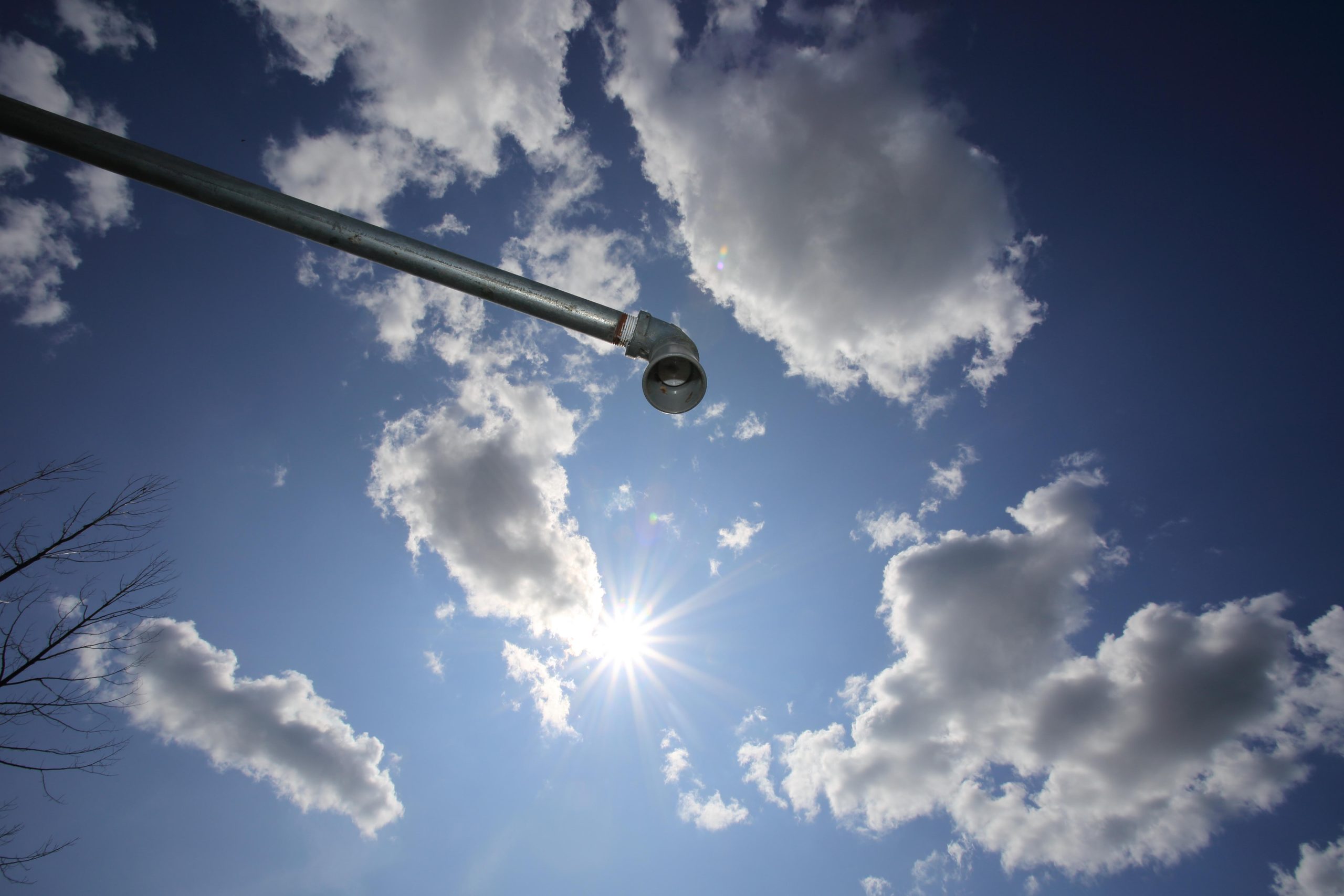 From the start, Branko Kerkez—an associate professor of civil and environmental engineering at the University of Michigan—was on a mission. With extreme rain events on the uptick, he felt an urgent calling to introduce more control into flood control. He and Brandon Wong, a post-doc in the same department at the time, soon joined forces, designing and building sensors to gather waterway data in real time from remote locations.

It was the beginning of a quest. With an investment from the Great Lakes Protection Fund (GLPF) and other agencies, they deployed a network of wireless sensors across Ann Arbor—an early warning system of sorts. According to Kerkez, flood control is all about connecting the dots, and there aren’t nearly enough of them.

“The major source of water data across this country is the United States Geological Survey (USGS),” Kerkez told me in 2019, pointing to a map in his office of monitoring stations depicted by thousands of blue dots. “They measure flow of rivers and streams at 8000 field stations. If you look at the map, their dots seem to cover the country, but when you zoom in—with 3000 counties in the US—a lot of counties end up with zero or just one measuring station.”

Kerkez had warned me that counties without stations are already spending millions on water infrastructure, but $20,000 to $40,000 per USGS unit is beyond their means. Although many watershed districts have reservoirs, wetlands, retention ponds, and valves to control floods, they are lacking the information and computer programs to coordinate water storage and water releases effectively. Kerkez likened it to putting a self-driving car on the road without enough sensors.

Determined to make data collection more affordable and responsive, Kerkez and Wong designed sensors for just $800 by limiting their design to reading waters levels rather than including water flow.

“The electronics are basically a stripped-down cell phone with just a modem and microprocessor hooked up to a sensor,” Kerkez explained during a tour along Malletts Creek in Ann Arbor. At each station, an ultrasonic sensor at the end of a galvanized pipe measured the distance between it and the water below using the speed of sound as a yardstick.

“If you walk past and listen real closely, you can hear them clicking,” he added. “It’s like a little dolphin, or a bat.”

The stations were solar powered, linked by cellular technology to a distant computer that could autonomously control the opening and closing of valves at key points along Malletts Creek in a coordinated sequence. Together, the sensors told exactly what was happening in the field at any given time, especially during heavy rains.

Ann Arbor officials discovered that the inexpensive system had increased the water-cleaning impact of one wetland some 50% by simply delaying the release of water and allowing sediments and pollutants to settle. Even in heavy rains, the sensors showed that upstream ponds were still filling, so automated valves held the water back rather than letting it flush straight through. In the end, the city estimated that the system saved some $1,000,000.

With the inception of their new company last year, Wong and Kerkez decided to focus on what they do best: designing sensor networks and reducing complex data into terms that water managers across the Great Lakes can easily apply.

“Think of it like the movie Top Gun,” says Wong, CEO at Hyfi. “The water managers are the pilots. They know the lay of the land and how to fly their planes. We’re the copilots, scanning the skies in all directions and feeding them the data they need to make good decisions.”

With additional investments from GLPF and others, Hyfi has developed a more portable, self-contained sensor that is already helping manage wetlands and watersheds feeding Lake Huron, Lake Erie, and Lake Ontario.

This summer, while installing a sensor at Shiawassee National Wildlife Refuge near Saginaw, Michigan, Wong talked about the sleek form of the new tubular units compared to the old combination of pipes, electrical boxes, and external solar cells.

“The components are very similar, and since the battery can go a full year on its own, the internal solar panel just tops it off. We wanted to focus on ease of maintenance and ease of deployment—not just for us, but for the people we’re working with as well.”

Refuge manager Eric Dunton is a bear of a man brimming with enthusiasm about the six sensors deployed across his reserve’s 10,000 acres where the Shiawassee and Tittabawassee Rivers join, forming the Saginaw River before flowing into Lake Huron 23 miles downstream. Like many national wildlife refuges, the land here is acquired from farms plagued by flooding. Dunton’s job is to reestablish natural cycles and processes, primarily for migratory waterfowl, by alternately flooding and draining a series of recreated wetlands linked by dikes and spillways.

“Long term, we could actually use more [sensors],” he muses as cool winds ripple across the waters of the refuge. “We have around 20 wetland units where we independently manage water levels. It makes our job much easier not having to send people out to check water level to time when to turn on pumps or close water control structures. Everything here is dictated by water levels in the river and Saginaw Bay.”

His task is occasionally complicated by a unique phenomenon called a seiche. Seiches occur in large, enclosed bodies of water like the Great Lakes, where strong prevailing winds push waters to one side of the basin.

“If you get a strong west wind, it’ll push surface water in Saginaw Bay to the east side of Lake Huron. It can change in a very short amount of time,” Dunton explains. “That impacts rivers this far inland and causes levels in the refuge and the Shiawassee Flats to drop a few feet within a couple of hours.”

The opposite happens, too. Strong northeast winds can push water from the east side of the Saginaw Bay up the Saginaw River, reversing the flow of the Shiawassee River within the refuge. Hyfi sensors keep track of it all, 24/7.

Moving upstream, Wong’s team meets with Corunna city manager Joe Sawyer on a bridge across the Shiawassee. Sawyer, too, is gung-ho about getting Hyfi sensors installed. Balanced on an abutment while examining how to drill into the bridge’s concrete and steel to mount a sensor, the former Desert Storm paratrooper is nonchalant about floodwaters racing just inches below his feet.

On the opposite bank, two teenagers play on the town’s new aluminum dock and kayak launch, encircled by rising Shiawassee waters. Sawyer says that with outdoor tourism now a major source of revenue, towns like his are installing Hyfi sensors for both boater safety and property protection.

Hundreds of miles away in Cleveland, though, it’s all about stormwater runoff, raw sewage overflow, and flooded basements. The next day, Wong and his two assistants meet with Michael Blair, a project manager with the Northeast Ohio Regional Sewer District (NEORSD) to install a sensor in a large basin looming behind a park in the Cleveland suburb of Parma. Nearby neighborhoods have long suffered from flooding, and even a $600,000 upgrade of the detention basin two years ago—designed to hold back stormwater overflow—wasn’t enough to curtail new flooding.

With three major watersheds (the Cuyahoga, Chagrin, and Rocky Rivers) cutting across Greater Cleveland, NEORSD is charged with managing an enormous land area. During heavy rains, old sewer systems mix raw sewage with stormwater overflow, discharging it straight into Lake Erie without any treatment. In the decades following an infamous fire on the Cuyahoga River in 1969 and passage of the Clean Water Act in 1972, Cleveland halved its annual discharges from 9 billion gallons to 4.5 billion gallons.

“A lot of people thought the moon landing was easier than cleaning up the Cuyahoga, but we were able to get both. I was about five years old when that happened,” says Blair, who once worked for NASA. “If you told somebody then that you were going to put kayaks and restaurants along the Cuyahoga and everybody would want to be down there, they would think you were nuts.”

In 2011, NEORSD implemented a consent decree with the US Environmental Protection Agency to further reduce annual discharges to under 500 million gallons by 2036. Known as Project Clean Lake, the 25-year plan outlines $3 billion of investments to reduce the amount of pollution entering Lake Erie. In the ten years since the consent decree, new infrastructure has already reduced annual discharges an additional 1.5 billion gallons.

“This is one of many basins in our Regional Stormwater Management Program, and a handful have Hyfi sensors on them,” Blair says. “By having these sensors as a network, we can use that data to refine our stormwater models.”

Toward that end, Wong and his team spend the rest of the day installing sensors along suburban creeks and the Chagrin River. Hyfi could potentially play a big role in balancing overflows across the watershed, as Kerkez and Wong did in Ann Arbor.

“You can’t have real-time control unless you know what’s happening out there, so you need a blanket of information,” Kerkez told me in 2019. “My hope is that, over the years, we’ll start to see more and more dots on the map and eventually enter an era when water decisions are made using information rather than the old implement-and-pray approach.”

Just two years later, Hyfi is connecting the dots for water managers across the Great Lakes.

To find out more visit open-storm.org.

Story and photos by Randall Hyman except where noted.